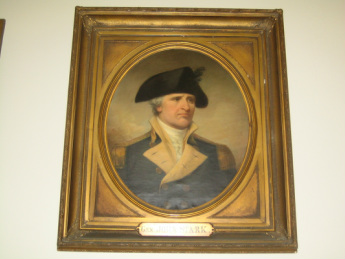 Starkville’s 175th birthday parade makes me wonder how places in Mississippi got their names.

Most citizens of Starkville know that our town is named for John Stark, a general in the American Revolutionary War who crossed the Delaware River with George Washington.  His most famous utterance, “Live Free or Die,” adorns the license plates in his home state of New Hampshire to this day.

General John Stark never set foot in Mississippi, yet a prominent city in our state bears his name.  It turns out that was a trend in our early statehood.  After Mississippi took possession of Choctaw Indian land through the Treaty of Dancing Rabbit Creek in 1830, a number of places were named for popular Revolutionary War heroes.

The county seat of Kemper County, DeKalb, was named for Baron Johann DeKalb, a German soldier of the French army who served as a major general in the Continental Army during the Revolutionary War.  This veteran of Valley Forge was killed in the Battle of Camden in 1780 and buried in South Carolina.

His protégé was the Marquis de Lafayette, the French hero of the American Revolution and young advisor to George Washington.  Lafayette County in north Mississippi bears his name.

Kosciusko is named for a Polish general who fought with the Americans in the Continental Army.  Warren County memorializes Dr. Joseph Warren, who sent Paul Revere on his famous ride and died two months later in the Battle of Bunker Hill. Marion County is named for the Swamp Fox, Francis Marion, a Revolutionary War soldier known for his guerrilla tactics in South Carolina.

Nathaniel Macon was a soldier in the American Revolution and later represented North Carolina in Congress as both a representative and a senator.  He was Speaker of the House during Jefferson’s two terms as president.  Given the large number of North Carolinians who migrated to Mississippi, it is no surprise that the town of Macon was named for one of the Tar Heel state’s favorite sons.

Carroll County pays homage to Maryland’s Charles Carroll, the longest surviving signer of the Declaration of Independence.  John Hancock, famous for his large signature on that document, is the namesake for a county on the Gulf Coast.

Montgomery County honors Irish-born Richard Montgomery, a Revolutionary War general killed in 1775 while attempting to invade Canada.  He died without knowing his partner, Benedict Arnold, would become a synonym for traitor. The scandalous James Wilkinson and the fiery Anthony Wayne posthumously lent their names to Mississippi counties.

Sergeants Jasper and Newton were soldiers in the Revolution who were popularized by Parson Weems in his 19th century school books. Several other states have a Jasper County with a county seat of Newton, or vice versa.

Of course, Mississippi has counties named for the first five presidents: Washington, Adams, Jefferson, Madison and Monroe. Greenville, the seat of Washington County, and Greene County are both named for General Nathanael Greene of Rhode Island, Washington’s friend and comrade-in-arms.

Most counties created in antebellum Mississippi that were not given Indian names honored Revolutionary War veterans.  But things have a way of coming full circle.  Greenwood Leflore, the Choctaw Indian chief who negotiated the Treaty of Dancing Rabbit Creek, has both a city and a county named for him.  He is the only Choctaw Indian so honored on former Choctaw land. Now that’s revolutionary!

Brother Rogers is a guest columnist and works at the Stennis Center for Public Service.