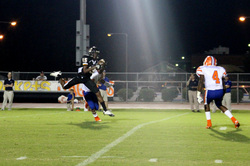 Are you ready for some football?  I hope so because if you’re reading this now you need to show up on Friday night at 7 p.m. to watch the Starkville High School Yellowjackets host Hernando in their first home playoff game since 2003.  These boys deserve a full home stadium to support them.  It’s time to show our civic pride by showing up to cheer them on.

Starkville football coach Jamie Mitchell has coached the team to a 9-2 record, including a big win over 6A power Madison Central (currently ranked 4th in the state).  The team sports an undefeated record of 7-0 in their division and is ranked 7th in the Clarion-Ledger’s Super 10 poll after knocking off Neshoba Central on the road last Friday night.  Starkville is ranked second in the state in Class 5A and is undefeated at home.

This year the Yellowjackets dropped a classification in the Mississippi High School Activities Association.  The classifications are realigned every two years based on student population.  Starkville previously was one of the smallest schools in the largest classification, 6A, competing annually against teams such as South Panola, Olive Branch and Meridian.  Class 6A is new in Mississippi, only beginning in 2009.

Starkville High is now one of the largest schools in Class 5A, which includes teams such as West Point and Oxford.  Both 5A and 6A have 32 teams split into four divisions.  (All the smaller classifications from Class 1A to Class 4A have many more teams).

The top four teams in each division qualify for the playoffs.  Therefore, a total of 16 teams will compete in the postseason for the state championship.  To win the state championship, a team must win four consecutive playoff games against top-caliber competition – the same number of games an NFL wild card team needs to win the Superbowl.  Got it?

This 2011 Starkville team is exciting to watch.  SHS quarterback Gabe Myles, whose father Eddie Myles played at Mississippi State, is a dual threat running and passing the football.  Two other playmakers all year have been Preston Baker and Devin Mitchell, but what I like most as a fan is that more than a collection of stars, these Jackets are truly a team.

This team has shown resiliency by overcoming the loss of two of their leading tacklers on defense earlier in the season.  They also have overcome adversity by coming from behind to win on the road in the fourth quarter at Ridgeland – the stuff that championship teams are made of.

Starkville High School football has a rich tradition.  They won state championships in 1984, 1994, 1995 and 2001.  In the state’s top classification, which until 2009 was Class 5A, only South Panola and Moss Point have won more.  It’s been nearly a decade since the Yellowjackets have fielded a team this good with this much promise for the postseason.

This year’s SHS team has a chance to make a deep run in the playoffs, but it all begins at home on Friday night.  Playing at home should provide a home field advantage, but only if the stands are full and the crowd is yelling.  If you used to come watch the Jackets play but have not been in a while, or if you’ve never seen them play but enjoy quality high school football, then come out Friday night.  The 2011 Jackets have given our community reason to be proud.  Let’s show these boys we appreciate their efforts by filling the stadium to root them on to victory.  Go Jackets!