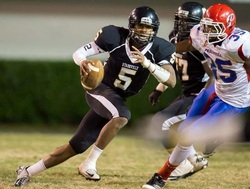 Congratulations to the 2012 Starkville High School Yellow Jackets on winning the 5A football state championship!  The Jackets defeated Pascagoula 28-11 in Jackson to claim Starkville’s fifth state title.  What a great source of civic pride!

Prior to the 1980s, the Mississippi High School Activities Association did not organize a state playoff system or crown a state champion.  Since the advent of classifications by student population in 1981, South Panola is the only large school that has won more state championships than Starkville.

In that time, Starkville has won their division 13 times and posted 26 playoff appearances.  The Yellow Jackets have had 27 winning seasons against only three losing seasons. Three times they have gone undefeated.

The 2012 edition of the Starkville Yellow Jackets has earned a place second to none in this storied history.  To begin with, the team had to overcome the tragic death of Devin Mitchell, who was not only one of the best players on the team but one of the most beloved students at the school.  The coaches and players dedicated the season to him.  His influence was obvious from the first game of the season to the celebration after winning the state championship.

On the field, the Jackets started slow, losing three of their first four games to Noxubee County, Madison Central and West Point.  What we didn’t know at the time was that Noxubee County would not lose to anyone and would claim the 4A state title, and Madison Central was one of the best 6A teams, losing to eventual 6A champ South Panola in the semifinals of the playoffs.

We also didn’t know that after its 1-3 start, Starkville would never lose again. Starkville marched through its division in dominant fashion, hardly surrendering a score to any of its opponents.

Then there is West Point, perhaps Starkville’s most bitter rival and main obstacle to a return trip to Jackson.  One mark of a championship team is they get better as the season progresses.  The West Point game best demonstrates Starkville’s improvement. Early in the season, Starkville lost to them 47-22. But when it counted most, in the playoffs, Starkville (just like last year) avenged its regular season loss with a dramatic come-from-behind win in overtime, 29-28.

The West Point game also showed Starkville’s resiliency.  This team refused to lose.  In overtime, down 28-21, on fourth and goal from the 15-yard line, quarterback Gabe Myles threw a miraculous touchdown pass.  He then used his trademark shifty moves to improvise a two-point conversion for the win.  It was one of the most exciting football games I have ever seen.

Perhaps the most resilient player on this resilient team is David Fair.  The defensive end played almost the entire season with a torn ACL in his left knee because he didn’t want to let down his teammates.  He exemplified the heart of a champion and is now a local hero for his inspired play.

I would be remiss if I didn’t mention one final accomplishment.  Starkville High beat Oxford High in the playoffs about a week before the Egg Bowl.  What a satisfying season!

Thank you Coach Jamie Mitchell, players, assistant coaches, managers and everyone associated with Yellow Jacket football.  You have made us all proud to be from Starkville.  Go Jackets!