Record Number of Women in Congress 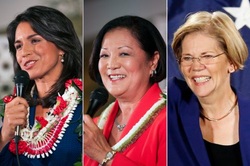 2012 has been a record-setting year for women in politics.  When the 113th Congress convenes next month, it will include the largest number of women in American history, according to the Center for American Women and Politics at Rutgers University.

Clearly, we have not reached parity when only 1 in 5 lawmakers is female.  But compared to recent history, the politically incorrect Virginia Slims advertising slogan comes to mind:  you’ve come a long way, baby.  This progress is reason for all of us to celebrate.

During Senator John Stennis’ last full year in office, 1988, only two women were in the Senate.  Ten times that number will now serve.  America is on the path to a more perfect union whenever our society allows the cream to rise to the top based on talent, not gender.  After witnessing firsthand the effectiveness of his colleague, Senator Margaret Chase Smith of Maine, Senator Stennis decried the fact that too often women had been denied the opportunity to reach their full potential as leaders.

Let’s break down the historic numbers of 2012.  Eleven states elected or reelected women to the Senate:  California, Hawaii, Massachusetts, Michigan, Minnesota, Missouri, Nebraska, New York, North Dakota, Washington and Wisconsin.  Four of those states – HI, MA, ND and WI – elected women to the Senate for the first time, and Nebraska elected its first woman to a full Senate term.

Noticeably absent from that list are Southern states, which lost a female Senator when Kay Bailey Hutchison of Texas retired. Of the 26 Senators in the 13 Southern states, only two are women: Kay Hagan of North Carolina and Mary Landrieu of Louisiana.  While the national numbers are encouraging, we in the South need to do a better job of encouraging and nurturing women’s leadership.

Among the record 78 women elected to the House of Representatives, 19 are newcomers – the most since 1992.  Only one of these newcomers is from the South: Lois Frankel of West Palm Beach, Florida.  Of the 149 U.S. Representatives from 13 Southern states, only 15 are women. We can do better than ten percent.

Open seats represent the best opportunity for women to make inroads into political leadership.  Of the 11 women who won their Senate races, only one defeated an incumbent.  Of the 19 women newcomers to the House, only four defeated sitting members of Congress.

In other notable achievements for women in 2012, New Hampshire became the first state ever to have an all-female Congressional delegation.  In January, the Granite State will have a female governor, two female U.S. Senators and an all-woman (two-seat) U.S. House delegation.

Mazie Hirono will be the first Asian/Pacific Islander American woman elected to the U.S. Senate and the first U.S. Senator born in Japan.  She is only the second woman of color to serve in the Senate.

2012 was a historic year for women, who have certainly come a long way.  Just as surely, there is still a long way to go.